I wanted to go old school RPG, but wanted to try something other than the 2D/overhead view. I chose the pseudo-3D approach of Dungeon Master, Wizardry, and the old SSI RPGs.

For this throwback to the days of gaming yore, I created a bitmap font to match the old Apple ][ font. I also wanted to try to make some of the coding 'retro', so the dungeon view is drawn to the screen SSI Forgotten Realms-style.

THEME CHOSEN: You are terrifying.

Okin and Oig were brothers. They had a piglet named Oink.

Oink had a habit of wandering off, and Okin would always go out to find him. Each time, they'd be back by supper, but this last time the food grew cold on the table as Oig awaited Okin's return.  Oig went looking for his brother. He spent hours that night but did not find him. Hours became days. Days became weeks. Oig never gave up.

His search took him far across the land, and eventually into a forest known to every nearby hamlet as accursed in every way. It was here that he had found a totally inexplicable stone door, and by it was a piece of cloth from Okin’s cloak.

“Hmmm...” Oig thought, “The writer must be trying to wrap this up.”

“You caught me,” said the writer.

And with that, Oig pried the door open. Before him was a set of stone stairs that led down to a corridor that branched north and east.

And so your adventure begins.

Aug 15 - Officially one week into this project, with a little over a day left to complete it. While I would love to add buttons and as such make it mobile friendly, that's not going to happen given one evening left to work on it. Maybe as a patch for a later date.

Aug 14 - Realized the text was not scaled correctly, giving me a lot more room than I really did have. Corrected the scale of the text, which resulting in an overhaul of some of the UI elements. Rage counter has become a rage meter. Gold was unused so it was removed. Chose the readability of the 5x7 font and the 10 character width limitation over going with a smaller font and more character space. Also, I'm kind of attached to the Apple ][ style font. :) 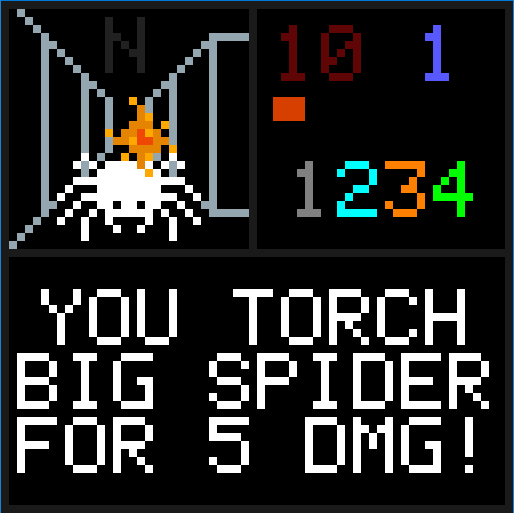 Aug 13 - I was originally going to go with MIDI for an oldschool sound, but decided to dial it all the way back to chiptune music. For consistency, I also changed the sound effects to 80s-era sound effects. I used Chrome Music Lab to write the songs in the game, each of which are about a dozen notes long at most.

Aug 12 - Created the combat system. The player has 4 spells at their disposal - 3 damage and 1 heal. Mobs have resistances, and certain spells will prove more effective than others against different mobs. Mana cost ranges from 1 mana for a basic physical spell to 4 mana for healing. If you reach zero mana, you will regenerate one next battle turn so you will always have at least a physical damage spell to cast each turn of battle. 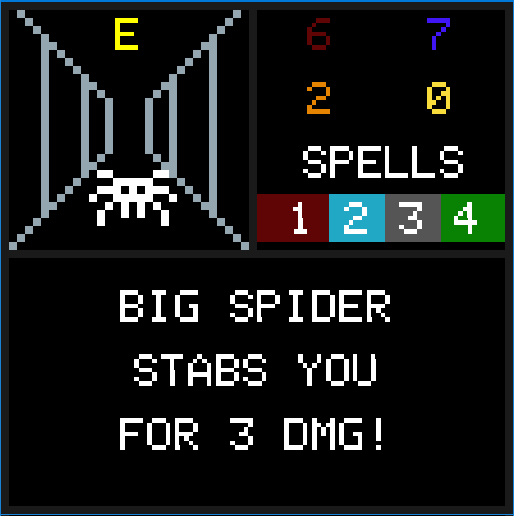 An added component is "Rage". As the player fights, they build up rage. Rage increases the damage of spells.  Once out of combat, the user's Rage will reduce over time.

Aug 10 - Wizardry is on my brain, as you can see from the intro and the UI. Here is a short overview of what I have so far.

Aug 8 - Shifting to RPG. Staying old school. For this throwback to the days of gaming yore, I created a bitmap font to match the old Apple ][ font. I also wanted to try to make some of the coding 'retro', so the dungeon view is drawn to the screen SSI Forgotten Realms-style.

Aug 7 - Sat down to come up with ideas for the gamejam. First idea was Legend of the Red Dragon, but that much text was a bit of a hurdle to do. Second idea was a classic graphical text adventure, but my initial attempts at 64x64 scenes were completely unrecognizable. Like, no matter how hard I tried, I could not make my scene of the Aztec temple and bushes (some 'Mask of the Sun' there) look like anything more than maybe a Dorito with smatterings of guacamole.

Pretty neat!  I liked the variety of enemies, the art was cute.  Good job on this! 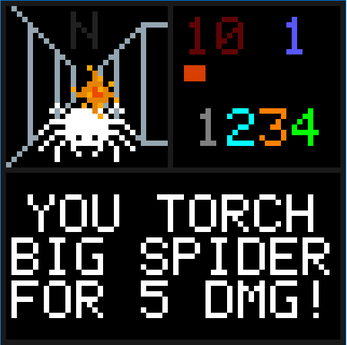 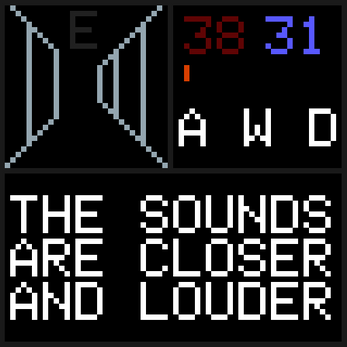 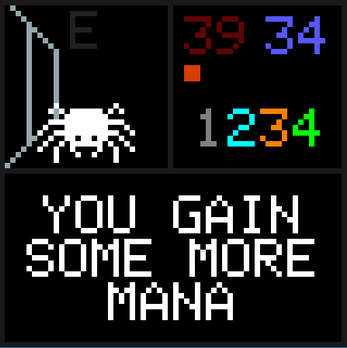 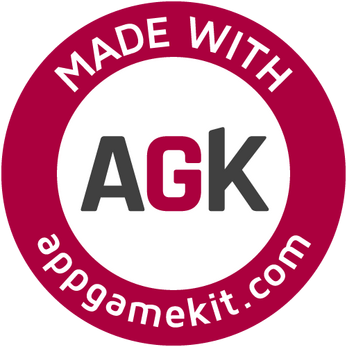